A painter of seascapes, I require a broad palette of grays for my work. Grays are everywhere. Clouds, often imagined as white, seldom call for white alone, but instead a spectrum of grays, blues, ivories, yellows, browns and pinks, at times even the darkest of near-black. The new painter achieves gray by mixing, of course, black and white. Such a binary gray color may work for rendering cold steel, concrete, aluminum, or other manufactured surfaces, but such a simplistic gray will not work for clouds. They are far too complex in their shadows and lights, their opacity and translucency.

Instead, experienced painter that I am, I mix opposites: Naples yellow and violet; cadmium orange and ultramarine blue; sap green and genuine rose madder, and then, if need be, I will add titanium white to that mix. I have a tube of ivory black in my paintbox, but it has not been squeezed. The dark tones come instead from this changeable admixture of opposites, always slightly different, always ambiguous, always many colors at once.

The clouds seldom call for white, as I said; when they seem to, and I mistakenly give them a simple white, they reply with a falseness, a stagey quality, like a caricature rather than the portrait that I intend them to be. They will also fail to convey light. Tinting them with jaune brilliant or geranium lake will make them brilliant against a cobalt or ultramarine sky. The rain-laden, impending cumulonimbus clouds ask for a different gray than do the ragged shards that are the vestiges of a storm. Tornadoes breed their own colors, too: first a sickly yellow, “puce,” it’s called, but the tube says “Indian yellow”, and I sharpen it with chrome green; then the sky will go suddenly dark as a box and black as a bruise. Against these awful clouds, the water’s horizon glows a fluorescent aqua, and the October seagrass leans toward a terrible turmeric color. They are altogether frighteningly beautiful, but I must get to shelter.

The water, too, will be gray: the steel gray of the ruffled bay as Prussian-blue harbinger clouds announce the storm; the palest sap-green-gray wake of a waterman’s boat motoring out to sea; the nickel-yellow silver of sunshine hitting still water at a late-afternoon slant; the near-white, ruby-lake pinked gray of the same stillness much, much earlier that morning, as the snowy egrets silently fished. But the last thing the water does before nightfall is to overcome the light of the day with its own brightness, and the sea will change place with the sky, before dark.

By the water’s edge, the earth has its spectrum of grays, too: the elusive lavender that shimmers briefly as a wave ebbs from shore, marking the moment; the bright golden gray of sand at high noon, low tide, bright day: Naples yellow, and permanent violet. The shadows tempt me into the convenience of a blackened white, or a whitened black, but the shadows are harlequins too, full of bent and bounced light, and the more I work, the more I love them. They, the shadows, are the secret to the light.

Years went by before I realized that the dark is the way to the light. The rookie’s mistakes were all in painting a bright day in bright-light colors. It never was convincing. I finally saw that the light demanded shadow, and shadow made light. Something as seemingly objective as color in fact exists only in context. It was a watershed moment. I began to paint with this understanding.

Into this flux of daily work came, almost accidentally, a clip of expert political analysis on world affairs, to this effect:

The so-called “Gray Zone” is what the terrorists seek to destroy. To them it represents the civil society — ordinary life — where infidels, apostates, and believers mix freely, living and working side-by-side. They use violence, which forces people to choose sides, to destroy that life. That is what the Gray Zone means to them.

For a painter, the idea that the world would consist of three colors, black, white, and gray, came as an absurdity. Yet the cogency of this statement (which I have now read in various forms) shocked me into considering it. What conditions could make a person see the world this way? What is the importance of art in such a world?

These unanswered questions had kept me away from painting for many years, long enough to publish books and articles as an historian of political culture. A single book, its cover an etching of birds’ eggs, prompted the answer I needed. It was Elaine Scarry’s On Beauty and Being Just. Beauty, she writes, compels us to acknowledge it. I realized that once beauty, however evanescent, flawed, or endangered, compels us to honor and protect and reproduce it, then we must care for something outside ourselves; we must, in Iris Murdoch’s word, undergo an “unselfing.” Beauty deposes us from the center of our world, while making us happy to be deposed. In that obligation, that experience, lies a foundation for justice.

Beauty is no trivial diversion. Not only is it a foundation for justice; it may also be key to survival. In some riveting work on the beauty of landscapes, the late philosopher Denis Dutton has found that world-wide, in widely differing cultures, a particular kind of landscape with a low, distant horizon, evidence of water, low shrubs, and a pathway extending into the distance, is universally recognized as beautiful, even by people who have never encountered such a landscape of plenitude. This landscape contains all of the elements for human habitation, and an implicit promise of more over the horizon. Beauty appears to be bound to survival. As Scarry reminds us,“it presses us toward justice, and . . . toward the diminution of pain.” Both beauty and justice, she notes, have “injury” as their opposite term.

To be just is to be fair, which entails symmetry in our relations to one another. Justice, being an artifact of human creation, requires work. Anything that encourages creation, and plenitude, is useful to justice, Scarry continues. Beauty impels us to create, endlessly, until eventually there will be “enough.”

But the turning toward manufactured, artifactual beauty, and away from natural beauty, may be something of a wrong turn in artistic creativity. There is already enough. This is why I put myself out there, exposed to the elements. Realism, naturalism, places us in the embrace of nature, in its reassurances about Nature’s greatness and our own smallness. Realism encourages that mysterious merging of the artist with the object of beauty, the landscape, and urges me toward unselfishness.

Scarry explains, “Over the long run of human history the constant presence of beauty helps call us to the work of repairing injuries in the realm of injustice.” Beauty heightens our acuity; it draws us to attention. Attention is the foremost predicate of empathy. It helps us to see.

Conversely, when access to the beauty of the natural world is cut off, when it becomes a commodity that is unevenly distributed, the foundations for justice are eroded. Scarcity or degradation of natural beauty creates fear, anxiety, and conflict. It impairs our ability to see.

On April 19th, 2015, when a young Baltimore man named Freddie Gray died in police custody, my Congressman, Elijah Cummings, spoke of Freddie Gray’s now-familiar face. He had become, in death, a celebrity. Congressman Cummings asked our community, his constituents, whether we had ever seen Freddie Gray when he was alive. Had we ever seen him? This brought to mind a long-ago interaction that I had had with a man in a video store (that’s how long ago it was!). I came into the store through the front door and, contrary to my normal practice, didn’t glance behind me to see whether I should hold the door. I was preoccupied with finding my footing, and allowed the door to close once I was in. The man was right behind me, and I had not seen him. He pointed this out to me. I said, “I didn’t see you.” He said, “I know you didn’t. We’re invisible.You don’t see us.” His companion seconded this, and they turned away with some satisfaction of a wrong having been righted. It touched me. I walked across the store, placed my hand on his arm, looked him in the eye, and said, “I’m sorry. You’re right, I didn’t see you. I just got new glasses, and I am not used to them yet.” He was surprised, but said, “You all right.” I thanked him.

There is a phenomenon of light and timing that happens at the edge of the water as a wave recedes, where the water skims the surface of wetted sand and reflects for just a moment the light above it, while revealing the purple sand below. It’s a lavender moment. Until you catch that detail, nothing you paint at the edge of the sea will be convincing; the entire meaning of the sea and the sand itself is in this recessional moment, that color where the water, the sky, and the earth merge. It is so brief that it is impossible to see once; you have to observe it hundreds of times in order to begin to get it. It is Italo Calvino’s wave, the impossible, the infinite, the beautiful, the temporary, the necessary. Your time, human time, is nothing compared to its time. This modest little slip of water in retreat has made the grains of sand by patiently turning the rocks, over and over.

This is The Gray Zone, the product of all of the small ebbs and flows, all of the great storms, of our clashing bodies and beliefs. The sand wants to consume the water, and the water wants to consume the land. The brief space in between is the beauty part. Dante wrote, “Poi chi pinge figura,/Se non può esser lei, non la può porre,” (Roughly, “If you cannot become that which you paint, you cannot put it down.”) So I mix Naples yellow light with both sap green and manganese violet, and a pinpoint of permanent rose, and I get it down. This is the work of art. 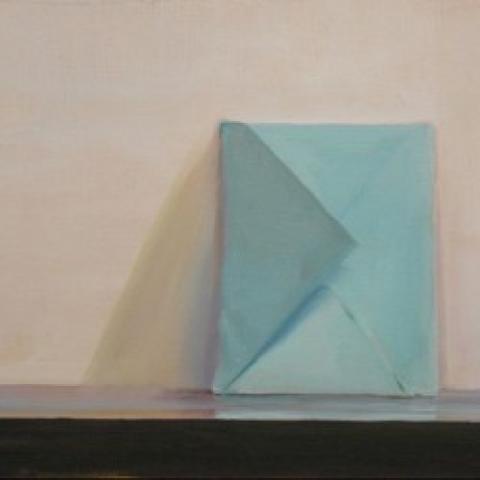