In 2004, renowned artist, Grace Hartigan dubbed me the “Lewis Carroll of Baltimore”. Today, I continue to fall through rabbit hole worlds now found in verse, modern and ancient myths, and the stuff of daily life. I was honored that Hartigan wrote that my paintings “like William James (have) a gift for psychology in her depiction of children. Damen’s use of paint is both sensual and tough.”[1]

This gift, Hartigan spoke of, came from Fear. I recall a time of magical escapism, a summer retreat from the fear that my mother could die from dangerous surgery. In my grandmother’s home, I found an old encyclopedia with colorful, costumed ladies. Drawing them transported me from fear to fantasy. No longer was I the terrified girl, maybe motherless. I was a dame with a tall hat, fluttering scarf and protecting parasol. Briefly, I found magic in art but later lost it. Pediatric nurse, teacher, mother, I took a journey of many decades and detours until ultimately, I landed in Baltimore. Every applicant interview (three in total) with Grace Hartigan challenged me. Finally in 2001, I received a MFA from the Hoffberger Graduate School of Painting, (MICA). Grace Hartigan, (1922- 2008) then the Director of Hoffberger showed me the way to rediscover magic in my art.

In 1999, Grace Hartigan bored with my uninspired paintings spied a photo of a school age girl, my youngest daughter uncomfortable in a floral blue bathing suite. “Paint her and use your imagination.” Heard as both an invitation and a command, Grace helped open a door to the child in me who had once found timeless wonder that fearful summer. The school age girl’s floral blue bathing suit became armor, an imaginary protection from her soon to erupt adolescent sexual awakening. “My Private Garden,” a breakthrough painting, combined my daughter’s image with the magic of my memories, anxieties and imagination.

Later, Grace Hartigan anointed me the “Lewis Carroll of Baltimore”… “Remember, terrible things happened to Alice – falls, chases, beheadings. I think Jessica is talking about things that happen to children who are both menacing and being menaced.” (McNatt, Glenn. Baltimore Sun, 11/29/04)

Increasingly, I delve into verse to discover new mysteries. The melding of the visual and oral is a new focus. My latest exhibition, Visions Verses Voices (The Delaplaine Art Center, Frederick MD, December 2019) creates an immersive environment. Poetry readings with soundscape introductions are conversationally replayed with continuous looped speakers. Art and poetry can be seen and heard simultaneously enhancing the immediacy of both.

In 2001, I was awarded a full resident fellowship at the Fine Arts Work Center (FAWC) in Provincetown, MA, by Elizabeth Turner, then Chief Curator at the Phillips Collection, Washington DC. I won awards from Jay Fisher, Senior Curator of the Baltimore Museum of Art, George Ciscle, Curator in Residence, MICA and Joann Moser, Senior Curator of Graphic Arts, National Museum of American Art, Washington, DC, among other respected curators. My artworks have been selected for invitational shows at the Delaware Center for Contemporary Art, Wilmington DE, Maryland Art Place, Baltimore and Capitol Arts Center, Rockville MD. My two sided, rotating paper scroll, “It Is Rumored, Bloody Point, MD” was included in the exhibition, “Emergence 2014: International Artists to Watch” at Galerie Myrtis, Baltimore, MD and “Raised With Walls – Bad Education” was included in the Biennial Maryland Regional Juried Exhibition, University of Maryland College. 2017 saw my paintings included in Zenith Gallery’s nationally juried exhibition “Resist”.

During June-July, 2018, Kent State University School of Art, Collection and Galleries and the Wick Poetry Center with support from the Ohio Arts Council presented “Home to Sargasso Sea: A long journey of loving collaboration, poetry, Maj Ragain and paintings, Jessica Damen” This exhibition represented the culmination of an eighteen year collaboration between Maj Ragain and I. 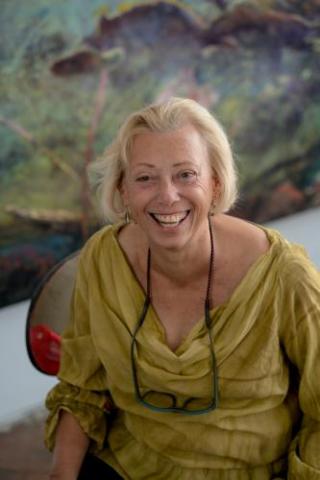