Sea Level Rise, ( 1st study for the Burghers of Calais) 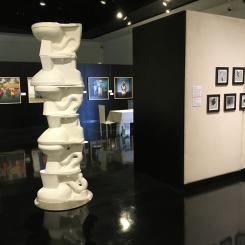 END_OF_DOCUMENT_TOKEN_TO_BE_REPLACED

I grew up the son of a plumber in Harford County,Maryland. At twenty-four, I purchased 20 acres of undeveloped forest. It was there that I started trusting my intuition and allowed myself to play with the materials of the forest. There I owned the artist in me. Within a year or so, I started taking art classes at the local community college. I spent the next three years at the Maryland Institute College of Art (MICA), while doing carpentry and small contracting to pay the bills. During the summer of 1988, I attended the Skowhegan School of Painting and Sculpture in Maine. I earned a BFA from MICA in 1989.

In 2000, I was invited to teach sculpture courses at MICA. I taught for two semesters. Then, I decided to go to graduate school at Rinehart, School of Sculpture, where I received my MFA in 2003.

Two weeks into graduate school, September 11th happened, which textured my two years there. It brought home the fragility of life and made me re-evaluate what it means to be an American. Before that experience, I would have never considered using the peace sign as part of my art work. After September 11th, I merged my thoughts about the environment and the need for peace in the world. It was then that I started the on going series, "Reinventing the Wheel".

My works have been shown in 10 states, in the District of Columbia, and China . These pieces have been seen in cities like New York, NY, Philadelphia, PA, Wilmington, DE, Knoxville, TN, Miami, FL, and Beijing China. The works have also appeared in a number of museums such as The Baltimore Museum of Art in Baltimore and The Art Museum of The Americas in Washington, DC. My work is in numerous private and public collections including the collection of Anthropologie and Urban Outfitters both based in Philadelphia, PA, The Delaware Art Museum in Wilmington, DE , A Private Collection in Beijing, China, and The Hechinger Collection in Largo, MD.