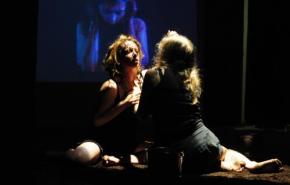 Carly J Bales is a performance artist, director, and arts organizer based in Baltimore. Her work explores femininity and gender dynamics, power and control, intimacy and strangeness, through performance, and often, a healthy dose of humor in media ranging from live performance and experimental theater to video and film. Since 2010, she has become "DIY theater’s most go-for-broke performer" and "an integral actor/performer in both the city's do-it-yourself theater and experimental performance art... more
View Carly's Resume

Written and directed by Carly J. Bales, Life or Theatre? explodes the work and subconscious of the 20th century expressionist painter Charlotte Salomon on stage, fusing her autobiographical prose and expressionist painting with classical music, cinema, and theatre into a singular expression of her self – a demand by a young woman to exist in a world that demanded otherwise.

A ship wrecks on this island that rests between galaxies – somewhere between the rational waking world and the magic dream world. Inhabitants from both these worlds collide as a sorcerer is now forced to confront their past life and conquer their deep-seated lust for vengeance. Bales performed the role of Trinculo in this beautiful rendition of Shakepeare's The Tempest.

Bales was commissioned to adapt this play from Matthew Thurber's cult comic series, 1-800-MICE, alongside director Sarah Jacklin. This expansive and psychedelic comic series was transformed into a free-wheeling, anticapitalist satire seeped in dream logic and inspired by the aesthetics of exploitation film and the Theater of the Ridiculous. Bales also performed the role of Aunty Lakeford, a new-age megalomaniac bent on cultural dominance and immortality.

Bales directed this world premiere from Chicago-based playwright, Savannah Reich. Walking the knife's edge between comedy and horrific tragedy, this piece was heavily inspired by teen melodrama films of the 1950's - 1980's, screwball comedies, and the different ghosts that haunt each of our lives. Featuring ghosts, doomed girls, dance numbers, possessed mothers, and the 1985 hit song, Head Over Heels.

More about the piece

The Ghost lived in the woods, Minding Her Own Business and definitely Not Haunting Anyone, until one day she saw a Pretty Girl and followed her home. It totally wasn’t even a thing. The Girl was probably not even going to notice.

Stupid Ghost is a dark comedy about ruining the lives of the people you love.

A collaboration with dancers Noelle Tolbert and Alex D'Agostino. This durational, movement-driven performance piece was commissioned for ROOM, an exhibition of oversized inflatable sculptures, at MICA.

The piece explored the body taking physical space as an inherently political act -- both oppressive and emancipatory -- in response to the pure geometry forms in ROOM. The piece invited itself to evolution or deterioration over the night. Audiences asked to come and go, touch and not touch, witness or ignore. The performers at times slammed their bodies together, climbed atop each other, or became ensconced within the same oppressive structures within the space. The interactions became struggles between independence and dependence, power and weakness, failure and success, the individual and the group. The living sculptures they created rose and fell, supported and antagonized, ebbed and flowed.

Strange intimacy and transgression transference. Closeness in the open. Participants are asked to pay a small fee. In exchange, the artist will eat their sins and absolve them of any guilt. Over time, the residue of the sins accumulate into a new form and body.

The World is Round

Adapted from Gertrude Stein's children's novella, The World is Round combined Stein's non-linear narrative and playful lyricism into a new ensemble-driven piece with original music from Wye Oak's Jenn Wasner. This co-production between Annex Theater and Acme Corporation was directed by Lola Pierson and featured a "wildly dynamic ensemble cast".

soft. pricking. painful.
A seduction. A danger. A trick. A soft, smothering obliteration. With Emilia
Pennanen and Karen Carpenter of The Carpenters.

We hope you enjoy our performance.
An absurdist cabaret of beauty, gender, and violence. With Jacob Budenz.