Jeremy Jirsa was born in Baltimore, Maryland in 1992. He graduated from the Maryland Institute College of Art (MICA) with a Bachelors of Fine Arts in General Fine Arts and a minor in Art History in 2014 and Master of Arts in Teaching from MICA in 2015. In 2017 he received his Master of Fine Arts at The University of Pennsylvania. His work has been exhibited up and down the East Coast as well as Florence, Italy.

While bringing my tourette’s syndrome to the forefront of my practice I find my work exploring tones of isolation, self-medication, and depression, ultimately offering a perspective of tourette's through a false façade of perceived reality. My tourettes manifests itself through throat clearing and the making sounds along with arm/shoulder spasms and head jerking. Living with such an ailment has left me in chronic pain and at times unable to function due to extreme ticing. Leaving one to feel trapped and as if they are a prisoner within their own body. Through the work, my goal is to explore the psychological space and coping mechanisms that are integral to my personal experience of tourettes itself, within the internal and external environment of one's being while simultaneously exploring larger themes of self doubt, self depreciation, anxiety, social anxiety and the want to conceal an aspect of self.

My work has much emphasis on the “smiley face”. This image is repurposed from the “take away” bags available at any fast food restaurant. I view the take away bag as a tragic figure. It is always smiling and telling the world to "have a nice day" even though once its purpose is served it is to be discarded. I see the bag as a metaphor for the facades people wear in their everyday lives. The smile to hide true feeling and the mask to disguise what sits just beneath the surface. The jovially social butterfly until the party ends. The crying clown. The defense mechanism of poking fun at onces insecurities before others have the opportunity. Always covering and holding what is inside while reminding its audience to “Have a Nice Day”.

The pain TS sufferers experience, both emotional and physical, at most times is suppressed and hidden. I can’t necessarily control my tics but at times I can fight to suppress them in order to hide what is truly happening until we physically can no longer suppress my tics and have to release everything that has been boiling underneath the surface. Hiding the physical and psychological distress from the public and dealing with the suppressed fallout on my own, while I present a false composure to the world. The bags and smiley faces become a facade and a stand-in for the body, creating an externalization of one's psychological space and mental process. The hiding and recognizing, the play between facing aspects of one’s self that may be too hard to deal with, while simultaneously keeping and maintaining outward composure. 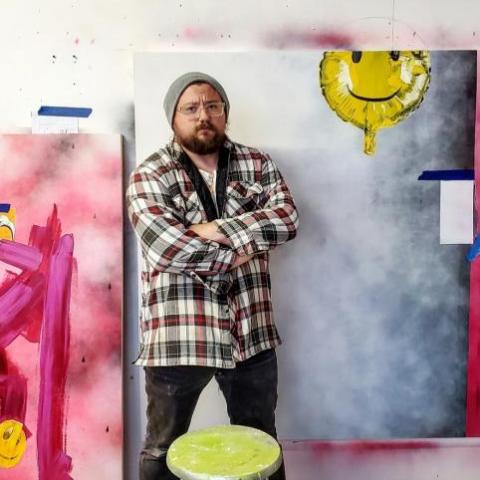