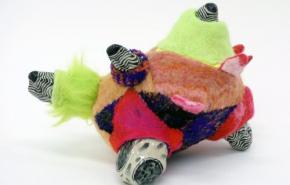 Gina Alexandra Denton is a visual artist based in Baltimore, MD. Her sculptural practice is rooted in intuitive play, and her material index spans several craft based media, including fiber ceramics, and metalsmithing. Viewing art making as a form of intuitive cosmology, Gina creates work that explores the concept of space, both internal and external, micro and Marco. Her interactive, modular, “playable” sculptures aim to cast the viewer in the role of the mystical child who, upon encountering... more
View Gina's Resume

For the past few years I have been making wearable objects that explore the concept of adornment as a form of social armour. Using textiles, and traditional metalsmithing techniques, I aim to create wearable art that pushes the boundaries between fashion, and sculpture, and subverts the notion of jewelry as a delicate afterthought.

As described by Wikipedia, " Panspermia is the hypothesis that life exists throughout the Universe, distributed by space dust, meteoroids, asteroids, comets, planetoids, and also by spacecraft carrying unintended contamination by microorganisms."

Thie Project, is a culmination of  ten years of devotional object making spanning from 2008-2018. My point of inspiration for these works is what I can only describe as my own "intuitive cosmology"

The objects presented in this series that I call "panspermia" are what I refer to as "Intimate Objects", as they are objects that are meant to be touched and held close to the body. By adding a tactile dimension to the experience of the work, my aim is to invite the viewer to have an intimate experience with the art object.  That experience may evoke sense memories of  tactile experiences with comfort objects, and toys in ones youth. the objects are sized as to be held in the arms, often at the height of ones chest.

These pieces are the direct result of my long standing fascination with art objects as toys, and vice versa.  I invite the viewer to touch these pieces. To hold them as they would a doll, or a devotional fetish object.  I love to create toy-like objects that, beneath thier bright tactile surfaces, invoke the uncanny chaos of nature that is simultaneously our source of life, and the cause of all death.

BIG GIRL WANNA PLAY TOO Is a project that I completed at Elsewhere Museum in Greensboro, North Carolina for the Baltimore Goes Elsewhere 2017 exchange fellowship.

BIG GIRL WANNA PLAY TOO is a modular, playable sculpture and wearable line that explores fatness, femininity, and the politics of self expression . It lives in the "Transormatorium" or wardrobe of Elsewhere museum, and utilizes Elsewhere's vast collection of mid century upholstery fabrics as a primary medium. It also adds to the wardrobe in the form of a series of fat, plush wearable pieces that hopefully begin a tradition for future residents to create thoughtful wearable art/ couture for the collection, from the collection.

I love hand building with clay. My predilection within this medium is to create mid-size to large functional vessels whose surfaces display hyper graphic-glaze patterns that reflect my drawing style, interest in pattern, and fascination with the interplay with the micro, and macro cosmos.

ADULT BABY TOY
2015
Adult Baby Toy was a solo installation I created at EMP Collective in Baltimore, MD in 2015. Adult Baby toy was an exploration of personal storytelling through intuitive symbol magic, and tactile play. With Adult Baby Toy, I created an interactive, modular, “choose your own adventure” installation with a series of large floor sculptures wherein the viewers were invited to re arrange and re create forms through play. The forms, in some ways resembled games or tactile learning toys for toddlers, but on a deeper level, the basic forms of each sculpture referenced a type of tantric symbol painting named Kohbar, wherein basic tantric symbols (such as the lingam, and the yoni) are intertwined in an image to symbolize balanced unions between masculine and feminine identified energies. Within my installation, however, the basic symbols are skewed in size, shape and arrangement as to hint at a more realistic, personal, and at times unbalanced power dynamic within a given binary, or non binary relationship.

KILTER was my first modular playable sculpture installation that I created in 2012 for my solo Exhibition at The Whole Gallerey in Baltimore, Maryland.

It is constructed of plywood, a steel armature, pom poms made of various yarns, tinel, caution tape, paper mache, and latex paint.

Viewers were encouraged to unthread, and re arrange the pom pom towers at will. Kind of like a playable art toy for adults, and children.

All together, the installation was roughly 6'x 17'x22'

The following are two works I made in 2014 out of found shoe laces, and a large quantitiy of  found black and white rope.

The pieces are hand, and machine stitched, and contain bits of found fabrics and hand Felted wool.

They are flexible and can be molded to form a wide variety of shapes.

These forms to me are a 3d model of how I envision space-time, if it could be seen as a tangible object.