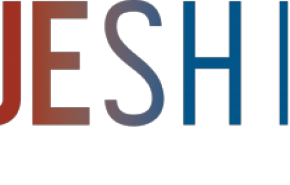 Caitlin McAfee (pronounced “MAK-uh-fee”) has had a prolific professional choreographic career working in a contemporary modern style, evolving since 2008. With interest in how we all exist in our own minds, McAfee enjoys exploring how humans form a collective unconscious, striving to connect with one another with varying degrees of success. Her work ranges from the meditative and emotional (see What He Left Behind) to the fiercely political (see Speaking with Fists), to the pointedly... more
View Caitlin's Resume

Performed at Baltimore Theatre Project in February of 2019 as a collaborative effort between BlueShift Dance and Vaught Contemporary Ballet. VCB provided a historical ballet, depicting the efforts of the Suffragettes. BlueShift Dance presented works by Caitlin McAfee as well as Natalie Boegel, reflecting the state of feminism and political discourse in present times, as women of today stand on their shoulders. Pieces presented include:

Faceless by Caitlin McAfee and Kendra Smith
A collaborative effort between the choreographer and the dancer, this two-parter showcases the story of a woman in the corporate world, trying to "lean in." We first meet her with a bag on her head, a wide, cartoonish smile drawn across both sides. Her movement is mechanical, limited, and stifled by the expectation to stay quiet and happy. After she finally finds the strength to "take off" this oppressive persona, she finds a powerful new freedom to be a full, whole woman. Her smile is gone. Large, wild movements reflect her big ideas and commanding presence in meetings. She can be sexy when she wants to be, and get things done. Inspired by the Suffragettes before her time, she fights for the opportunity to add her voice, and becomes whole and free in the process.

Speaking with Fists by Caitlin McAfee
Premiering at Bowie State University in the spring of 2018, this work was remounted because of its relevance to the #Resist movement across the nation. Controversial by nature, the work takes no subtle approach to critiquing the Trump administration's corruption, ignorance, and oppression. BlueShift Dance commissioned Arjun Bhamra of wesleepinforests, based in the UK, to create an original soundscore for the piece which consists of quotes and soundbytes reflecting Trump's corrupt dealings with Putin, Mitch McConnell's cowardice, and Emma Gonzalez's brave stance on gun control. The movement style was inspired by a menagerie of animals representing our current leadership including gorillas, turtles, and hawks. McAfee's act of protest, Speaking with Fists is a love letter to the free-thinking American people rightfully speaking out in rage and disgust.

Loud ≠ Right by Natalie Boegel
Originally choreographed for the Collective dance company by Natalie Boegel, this is a work with a vocalized soundscore performed by the dancers in mid-movement. Traveling from breathy solitude to group shouting matches, the work examines the nature of political discourse today, even among friends. Comedic at times, and troubling at others, the work is exciting to watch and provokes its audience to ask what happened to calmly and respectfully weighing the issues? At times when even the like-minded are at odds, how are we relating to each other, and to what lengths are we willing to go to make our voices heard?

Ticking, by Caitlin McAfee and Shianne Antoine
Designed as an improvisational work drawing inspiration from a news ticker, projected live on stage. In the piece, Shianne Antoine observes the ticker, and chooses a current event to use as inspiration for a three-part structured improvisation. Set to songs by Tom Waits, selected randomly at the time of the performance, the work is often sardonic and dark, evoking a sense of anxiety regarding the constant flow of the news cycle in the U.S. The point of watching this performance is to encourage the audience to take a few minutes to think about - to actually process - one thing happening Right Now.

Three men, not choreographers or dancers, created and set works on their wives and girlfriends as a means of reappropriating the male gaze:

"The “male gaze” refers to the act of depicting women and the world from a masculine, heterosexual perspective that presents and represents women as sexual objects for the pleasure of the male viewer. But what happens to a heterosexual man’s gaze when it is turned to a woman he loves deeply? Watch as our dancers perform works created for them, about them, by the men who love them. "

Final performance included interviews with couples, investigating the creative process and their views on the male gaze as it traditionally presents itself. The performance made Baltimore Magazine's list of the top 6 shows to see at Charm City Fringe Fest: https://www.baltimoremagazine.com/2018/10/29/six-things-not-to-miss-at-charm-city-fringe

A full-length, collaborative concert featuring BlueShift Dance, LucidBeings Dance, and SylviDances from the Baltimore/Washington Metro area. The concert examined how dance expresses different views of the universe, from plant life to the cosmos to relationships. The title of the concert was derived from BlueShift Dance's tagline, "Draw the Universe Closer."

Premiered at Le Mondo in May 2017 and performed at the Charm City Fringe Festival in November 2017.

Half of proceeds were donated to the Baltimore-based initiatives looking to ameliorate food deserts in the city: Baltimarket, a virtual supermarket and Boone Street Farm, an urban farm. 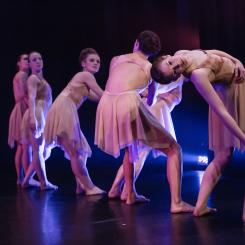 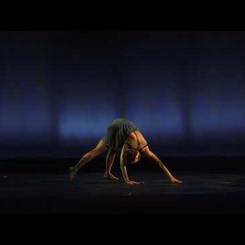 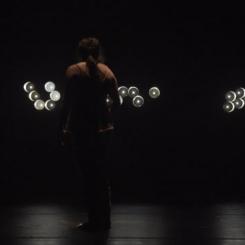 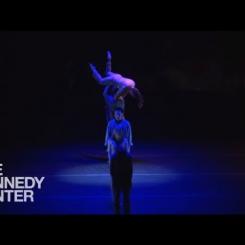