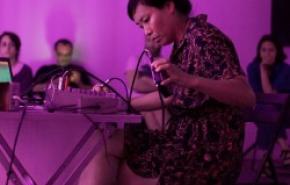 1,500 Red-Crowned Cranes is a layered, intricate, installation work about bodies in migration, the consequences of borders and boundaries, and the imaginative potential of in-between spaces. The title references the rare crane species that winters in the heavily guarded Korean Demilitarized Zone (DMZ) between North and South Korea. Because the DMZ has been uninhabitable by humans for over 60 years, it has become one of the most well-preserved areas of temperate habitat in the world. The red-crowned crane, east Asia’s symbol of peace and longevity, of which there are approximately 1,500 migratory species left, survives primarily because of its ability to winter in this region.

Audiences first encounter the installation in the gallery’s front room, a “library.” Here, handmade tables and shelves offered words, sounds and objects. If you placed your head gently on the tables you could listen to the audio tracks through the surface of the table. This was accomplished using small transducers attached to the underside of the table. Sounds selected for this installation included pink noise and spoken texts. The pink noise pattern, 1/f occurs in many natural physical systems such as traffic flow, heartbeat rhythms and has even been discovered in origami models and Bach’s Brandenburg Concerto no. 1. The ordered chaos of pink noise was a metaphor for the DMZ.

On a high shelf that lined the perimeter of the room, objects were carefully displayed. Some objects appear to be precious and ritualistic, others day-to-day ephemera and easily discarded materials. The objects evoke both the feeling that that a group of people have made a hasty retreat and the discovery of a cryptic archaeological site. From the street level, the objects are just nearly out of view and out of reach. A mezzanine up a short flight of stairs provided a broader bird’s eye view of the entire “library” though objects still maintain their elusive quality, asking the question of who has and who should have access to personal and historical artifacts.

The origami cranes were used to create a community ritual and performance that allowed visitors to reflect on the colonial history of Japan and Korea in addition to the precarity of the remaining red-crowned cranes. The goal during the exhibition was to fold 1,500 cranes, one for each of the remaining migratory animals in the wild.

In an enclosed, dimly lit, back room of the gallery, I presented as if from above and through, a four-channel sound work that uses noise colors (pink, violet, and brown) and pure sine tones as the foundation of the composition. The room was designed to feel like a limbo, a disorienting in-between experience emphasized by the rhythmic beating patterns and tonal sequences of the composition.

A small chapbook was published as a companion to the exhibition. We’ve imagines an impossible space in which survivors of an apocalypse are also the first discoverers and explorers of a new world.

"The hyphen is a connector, but it is also a tensioned line, pulling in opposite directions. 1,500 Red-Crowned Cranes plays with that tension, whether that be in storied objects, prose poems, pink noise, or a paper fold."

the p in pattern

the p in pattern, explores language, noise, and pure tones as compositional materials that subvert listener’s expectations and explore the boundaries between speech, meaning, and sound. This piece takes it’s title from the explanatory pronunciation text that you would see in a foreign language phrase book. The “p in pattern” is how one such phrasebook described the Korean, Hangul consonant ㅃ.

Video documentation of improvised electronic solo performed for Ken Vandermark's Options series at Experimental Sound Studio in Chicago, IL, May 2018. This improvised piece shows the expressive range of the circuit bent, no-input feedback, digital delay pedals that I’ve been working with for over a decade (seen in the lower left hand corner of the video). The piece focuses on the percussive hisses, crackles, static washes and high pitched tones and sounds that the pedals emit from specific components on their circuit boards. Over several years of improvising with these instruments, I’ve developed an alphabet and a language with these soundSolo electronics, Options Series, ESS, Chicago, 2018. Curated by Andrew Clinkman, Tim Daisy, and Ken Vandermark.

Audio Palimpsests are works created by manipulating, in live performances, a tape cassette player and a TDK EC-6M 6 minute looping cassette tape. The player is used during the performance to create playback and feedback by indiscriminately pressing the player’s controls (record, stop, forward, rewind).

Each work in this ongoing series is a six minute recombinant document of numerous live performances over the past several years where I recorded, re-recorded, and erased the sounds of audio tape feedback, myself and other musicians. The cassette is continually recording over itself every six minutes, an audio palimpsest of personal performance history.

The cassette itself becomes a site for performances of the past and for ones that never existed, and the releases document this impossible performance.

we listen, how we remember

we listen, how we remember responds to the Migration Art, Byzantine, and Pre-Medieval art galleries. The Migration Art period was a turbulent 700-year time in European history after the fall of the Roman Empire. I was inspired by the fact that this art was born of migration and movement. The objects, by necessity, were portable and utilitarian and the visual themes expressed the movement of people, culture, ideas, and religion.

In the design of these objects you see Paganism crossing with Christianity as Germanic tribes interacted with Celts. Objects made with rare jewels and metals were influenced by tribes that were exposed to Asian regions through movement in Eastern Europe. The objects also held, within their materials, the history of power, violence, and erasure; of people whose cultural identities were absorbed and altered.

A short reading and performance opened the work, where I used objects with attached tranducers to naturally “filter” sound using rocks, objects, and other materials. Afterwards, the audience was invited to move through the galleries and sound installation. Sounds were placed throughout the gallery’s rooms, emanating from objects positioned on the floor, hidden speakers placed under benches, and larger speakers placed out of sight, and included recordings of the museum’s HVAC and ambient sounds, shortwave radio samples, and sine tones. These materials enabled perception of sound to shift as the audience moved through the rooms. I chose frequencies that activated resonant frequencies in the objects and tuned one set of sounds to establish tritones (diminished fifths) or what during the Renaissance was referred to as the “Devil’s Interval” for is dissonant character.

we listen, how we remember imagines art objects and artifacts as lively and noisy with complex, layered histories. The work imagines that sound has imbued a physical, bodily, and perceptual history into these objects that can be activated and released.

21 years old in 2019, High Zero Festival models itself off of Company Weeks, an annual free improvisational festival organized by improviser, musician Derek Bailey from 1977 until 1994. The festival focuses on entirely new collaborations among a curated group of 22 musicians, half from Baltimore and half from outside the city and nearby metro.

The results are always unpredictable and often ecstatic.

A first time meeting of accomplished improviser Michael Zerang, percussion and Bonnie Jones, electronics at the High Zero Festival of Experimental and Improvised Music. This 30 minute set explores the dynamic range of timbres and textures of circuit bent electronics and percussion.

A longstanding musical relationship that formed in 2006 at the Seattle Improvised Music Festival. Andrea Neumann is an improviser and pianist, the innovator of "inside piano", an instrument that consists only of the strings, its resonance board and the cast-iron frame. The duo has toured extensively in the US, Europe, and Mexico, and in 2012 released "green just as I could see" on Erstwhile Records.

"by the time" was commissioned by the London ICA as part of their "Soundworks" exhibition, launched in conjunction with their presentation of Bruce Nauman's "Days." The work explores language and meaning through time and space, using electronics and field recordings. It present the paradox at the heart of sound, that ephemerality is also deeply embedded in our memories and bodies.