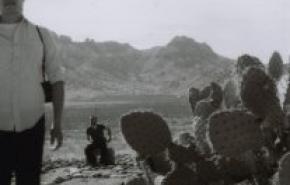 I immigrated to the United States from Taichung, Taiwan following my parents at the age of 13. Plano, Texas was not the America I had imagined. The USA I had imagined was a combination of Disney and the friendly caucasian missionary who came to my village to preach the bible and unconditional love from Jesus to mankind. Turns out Disneyland and Disney World were thousands of miles away from Plano, and I was not welcomed by the people who lived in Jesus-land. I tried to adapt quickly to the culture of... more
See 2011 $1,000 b-grant Winning Portfolio
View Andrew's Resume

This is a collaboration project with Michael Benevento. This installation is a Human Pinball game.

Mole-Balls is an interactive sculpture game built around the concept of Whack-A-Mole. Two teams. One team attacks by throwing rocks, knifes or grenades at the other team, the Moles. The moles, are represented by human beings from the other team wearing a mole-face bicycle helmet. The moles job is none other than to stick their heads through an array of painted boards with holes cut out of them, and hold still, so the other team could inflict mortal damage. At the end of each round, rocks, knifes, grenades, bullets or any sort of object would be collected from the faces of the moles, and counted as scores. Then the teams change position, as the moles become the whacker, and vice versa. At the end of each game, the score tells which team is the true Anti-Christ.

Ball Movement, Human Foosball is a project created in collaboration with Michael Benevento. This project also involved more than 10 artists and volunteers. It was a life size Human Foosball table, where the court was made of painted Masonite boards, and the handle bars were PVC pipes latched on to multiple trapezoid structures at each ends. 12 participants were needed to make the game functional. They get strapped in, linked arms and kick a giant inflated ball into the goal with the music and sound effects of the audience and our djs and mcs. Since movements would be limited, and they would only be allow to move side to side, team work is proven to the success to victory.
The entire project was created with a budget of $200. With the collaboration of many volunteers and Current Space, this project was able to be realized.

Double Dribble was a show held at Windup Space in Baltimore Maryland. It was designed as using groups of imaginary characters set in situations with the limitation of the gallery wall. Although each individual characters was intended specifically to fit a certain narrative or situation upon the creation, the audience would have freedom in rearranging them therefore recreating their own narrative upon the purchase of each piece at a reasonable price, capped at $75.

I made two installations for this group show held at Nudashank gallery in Baltimore. One is where my cat held onto my leg. And the other one is my interpretation of the constellations.

Yoga in the Zoo

This painting is about animals doing Yoga in the Zoo.

This installation is of the visions I have while traveling through the desert in New Mexico.

I combined my work and some Google images with Photoshop.

Double Barrel was a solo show exhibition held at Space 1026 in Philadelphia. Double Barrel is consisted of two installations and a group of paintings. The Worm, being the main installation piece, and the Human Anatomy (Male + Female). All panels are cut out by a jig saw, and sand it down with 100 tooth sand paper, primed, and painted with acrylic + latex paint.