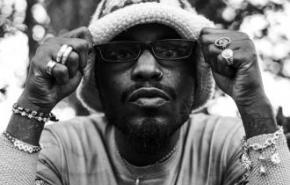 Al Rogers Jr. is a musician/stylist/creative director/curator/ and philanthropist from Baltimore, Md. Al was a poet before he became passionate about creating music. Inspired by different genres of music his style is very diverse and endearing, Al’s music reflects the duality of his city and upbringing. He has become one of the most impactful performer's coming out of Baltimore, mixing a background in dance with a innate knack for crowd control and participation. He’s also frontman for Da Lor Band,... more
View Al's Resume

"Luvadocious is that rare beast in an age of disposable, drive-by culture: A project from a lesser known voice that requires and deserves repeat listens and digestion over time. Produced entirely by Rogers Jr.’s collaborator Drew Scott, Luvadocious has a real cohesion and sonic richness that invite exploration more so than immediate satisfaction." -Jon Tanners via Complex Mag

"Al Rogers Jr. has never been afraid to be himself, and his heart-on-his-sleeve authenticity has allowed him to make some of the best hip-hop in the city. But as earnest as the local rapper might be, his true talent lies in his ability to surprise, from 2015’s Outkast-inspired Luvadocious with Blacksage’s Drew Scott to the star tracks on this brand-new second record. Now, Rogers stands alone, more confident and deliberate than ever, with tight, measured rhymes and a few standout melodies. “Sayno” might be our favorite song of Al’s thus far—a cantering Spanish ballad that tells the story of love lost through hushed lyrics, rhythmic finger snaps, the quivering heartache of violin, and a final flutter of piano. To all of that, we say yes." -Lydia Woolever via Baltimore Magazine

"All of his work adheres to a philosophy he’s termed “swooz”: the notion that love, togetherness and positive expression have transformative potential."

My First release of 2020 was Let's Talk with Brandon Woody and Goodboy
https://distrokid.com/hyperfollow/goodboy4/lets-talk-feat-al-rogers-jr--...