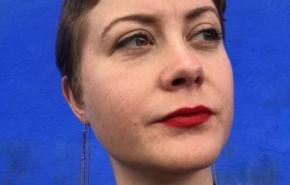 Hannah Brancato (she/her) is an artist and educator based in Baltimore. She is co-founder of FORCE: Upsetting Rape Culture, an art and organizing collective that creates creative interventions to disrupt rape culture. Founded in 2010 by and for survivors, FORCE is nationally known for producing large-scale public art campaigns, most notably, the Monument Quilt. Hannah was a 2015 OSI-Baltimore Community Fellow to launch FORCE’s Baltimore based survivor collective, Gather Together and as part of... more
View Hannah's Resume

Get It Off Your Chest, Pluck It From Her Breast

GET IT OFF YOUR CHEST, PLUCK IT FROM HER BREAST

Originally conceived of and performed at PÃ¼ss FÃ¼st 2010, Get It Off Your Chest, Pluck It From Your Breast is an interactive performance that invites participants to explore notions of shame and the body.

Get It Off Your Chest is a collaboration between Hannah Brancato, Kendra Hebel, and Sarah Tooley.

The piece was a part of Transmodern Festival's Pedestrian Services Exquisite, the International Drag King Extravaganza 2010, and the 14 k Cabaret in fall 2010.

To read all of the stories collected during the performances, visit: pluckitfromherbreast.wordpress.com

â??What Gives People Powerâ? is an oral history project focused on people defining power and control, based on their personal experience. Through interviews with domestic violence survivors and perpetrators, as well and staff and volunteers from the House Of Ruth Maryland, the project documents connections between perceptions of power and the cycle of violence. The resulting stories give voice to the stigmatized issue of domestic violence, while bringing to light the diverse ways and means that people empower themselves.

This project is a collaboration between Sharlene McNeil and Hannah Brancato, with contributions from Naomi M., Lakiesha F., and Anita R

Sex Is a Weapon (American Dream)

This piece was created in collaboration with the women's support group at the House Of Ruth Maryland. Participants were asked to create quilt squares based on the prompt, "How are women represented, or mis-represented, by the media?"

Power Suit is a collaborative quilt and documentary project about the relationship between self-confidence and the clothes we wear. I invite people to explain the significance of their choices in clothing through writing and interviews. Then, each participant adds an item of clothing to the larger than life quilt.

For the exhibition Down Through the Needle's Eye, Hannah Brancato and Charlotte Keniston created a space for a clothing swap, fostering interaction and a consciousness about consumption. Stained or otherwise un-wearable garments were cut up and stitched together by the artists to create quilts in the gallery during workshop days throughout the exhibition. When people submitted garments for the quilt they wrote a few sentences about the garment's history- where did it come from? When did you wear it? How long did you have it? Pockets throughout the quilts hold transcriptions of these stories.

This project was a collaboration between 2 collectives that I am a part of: feminist team FORCE: Upsetting Rape Culture and the activist collective Luminous Intervention. The project was conceptualized by Hannah Brancato and Rebecca Nagle, and carried out by the two of us along with Dan Zink and other members of Luminous Intervention. Photos are courtesy of Casey McKeel.

Stories of survivors of sexual violence were projected onto the US capitol building on the eve of the final presidential debate. The text tells the experience of survivors, which in a national conversation about the politics of rape, have eerily been left out.

Between the stories, the words RAPE IS RAPE were projected.

Women are twice as likely to be raped in their lifetime than to develop breast cancer. Only 14% of all rape fits lawmakers Ryan, Akins and Rivard’s narrow vision of “forcible rape”. The stories projected onto the capitol building last night are from the other 86% of people who have been raped:

FORCE strongly believes that American culture is uncomfortable to the point of being incapable of recognizing the reality of rape in this country. The organizers believe that the culture of rape will not improve until a more difficult conversation is had.

The origins of “legitimate rape” or “women who rape easy” are deeper than anti-abortion legislation, conservative views, or a few politically incorrect statements. The problems in the public conversations about rape are bigger than election year politics. The image of forcible rape is the only publicly recognized image of sexual violence in America, and it is not realistic. Rapists do not only use physical violence. Rape is not only committed by a few sick criminals. Rape is not a rare occurrence. Rape is much more complicated and much more common. If sexual violence is going to end, Americans need to drop the story of “forcible rape” and face reality. These stories are here to force the issue.

This was a project by FORCE: Upsetting Rape Culture. “PINK loves CONSENT” was a web-based prank that made consent go viral and sparked an internet revolution. FORCE pretended to be Victoria’s Secret promoting a new line of consent-themed, anti-rape panties. The action and internet aftermath got millions of people talking about consent, rape culture, and the sexual empowerment of women.