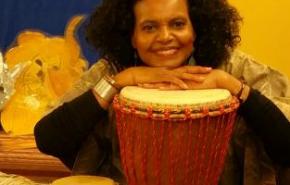 Devonna B. Rowe is a performing artist and educator.  The soprano received her DMA in Vocal Performance from Catholic University of America, a MM from the University of North Carolina at Chapel Hill and a BA in Music Education from St. Augustine’s University. Additional studies include the Aspen Music School and the AIMS Program in Graz, Austria. Rowe’s teachers and coaches include Addison Reed, Martha Flowers, Todd Duncan, George Shirley, Adele Addison, Mary Ruzzika, Fabiana Bravo, Henrietta Lund... more
View Devonna's Resume

"Musical Portraits of Jazz Legends" Artists from the Baltimore Washington area are highlighted in this presentation. Their lives, music and rise to public attention are highlighted during the presntation. The program was created in honor of Billy Holiday, Ethel Ennis, Ruby Glover, Cab Calloway and Eubie Blake. Their contributions to Jazz on on the national and international levels are significant to the history of jazz and music in American. This is an excerpt from a performance at the Reginald F. Lewis Museum in Baltimore, Maryland.

Through music, these Integrated Arts Education presentations involve students from grades K-12 in Language Arts Skills, History, Culture and the world around them. As a certified teacher with the Maryland State Department of Education, I have combined the best of both worlds in each presentation.
" Vocal Works", The Folk Music of African Americans", "Opera Imitaites Life" and "Songs of Africa" are just a few of the presentations offered.

Dancing in the Sun by John Work

"Dancing in the Sun" is by African American composer John Work. His compositions include Art Songs, Spirituals as well as other musical art forms. This song reflects the joy felt by a young boy as he plays under the warmth of the sun. Capturing the heart and soul of the words within each work is key to each performane. This presntation embrases the exhileration and spirit of the youth.

Ravel’s song cycle for soprano, Shéhérazade gives us an example of
three focus areas, Emphasis on words or text, tonal color and
rhythmic variety. This work is based on three
poems by Tristan Klingor: Asie, La flûte enchantée, and L'indifférent.
The legendary Arabian Nights, or A Thousand and One Nights as they are also called.
It is a collection of Arabian, Indian, and Persian stories written in Arabic
between the 9th and 16th centuries. They became well-known in Europe
after they were translated into French in the early 1700s, giving the
Western world Aladdin, Sinbad, Ali Baba, and a lasting cultural and
literary cliché: magical, exotic Asia.

La flûte enchantée the romantic yearning of lovers, separated by servitude, discover a connection through music.

Some of these tales trace their roots back to ancient medieval arabic, Persian, Greek, Indian and Jewish folklore and literature. Common throughout the tales is the initial story of a ruler and his wife, Sheherazade.

Benefit Concert for the Center for the Arts of Harford County

On September 18, 2016 I presented "Songs in the Key of Life" a Benefit Concert for the Center for the Arts of Harford County. The program included, German, French, Italian, and Spanish songs as well as Spirituals, Sacred songs and works by African American composers.

This projest was a performance in celebration of the life of Dr. Martin Luther King Jr. It took place at the Hosanna School Museum in Harford County MD. This was the first shool for African Americans in the county. As I sang and played the spiritural, Don't Feel No Ways Tired arranged by Jacqueline Hairston, the words of the song reminded us of the energy and commitment that the civil rights leader had as he fought for justice and equality for all people. His wife Coretta Scott King, was remembered not only for her support for her husband but because of her contrubution and training as an African American concert artist. I performed the aria "Io son l'umile ancella" from Andriana Lecouvreur by Francesco Cilea in her honor.

The one room of the Hosana School with it's desks and memoribilia from a time long ago was alive with history, music and life during this time of celebration.

The Boy and The Tree of the Animals

This project is called Songs of Africa and it took place at Monarch Montessori School. Students learn history through the game songs, story songs and recreational songs in this project. The history and dances of the African culture bring characters to life as students become a part of this Arts Education presentation. The Boy an the Tree of the Animals, is the story of a Shona Ngano Story Song . The song in the story, Zangaiwa Chakatanga Pano, allows the students to become a part of the history and culture of the Aftican tale. 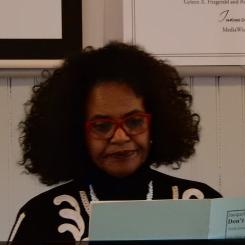