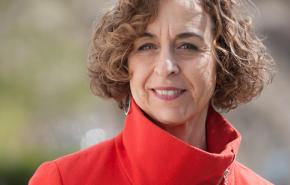 Regina DeLuise was born in Brooklyn, NY, earned her BFA at SUNY Purchase and received her MA from Rosary College, Graduate School of Fine Arts in Florence, Italy. She was awarded a Guggenheim Fellowship in 1993 and has traveled throughout India, Nepal, Bhutan, South Africa and Europe. Regina continues to use film and shoots with an 8 x10, larger format view camera. Her work is represented in private and public collections including the Museum of Modern Art and Metropolitan Museum in NY,... more
View Regina's Resume

Drawn to the ineffable and the curious nature of the real, this work explores the visual complexities of contemporary experience through still life, portraiture, and landscape photography. I am moved by the power of the photographic image and its ability to embody the richness of the human experience. My hope is that the images reveal a love of the medium, the recognition of light, circumstance, and my need to roam toward the unknown.

Dreamer’s House has provided the opportunity to consider a more nuanced space; one grounded in the nature of home as refuge. The images incline inward; towards sanctuary, one’s second skin or a place so close it is not seen or felt. They describe a sentience, the passage of time, and a universal sense of what each of us craves.

I continue to use film and a large format, 8x10 view camera. This allow me to move slowly and interpret my surroundings at a pace that has more to do with a meditation and very little to do with current culture’s spinning clock.

Her World      by Barry Schwabsky

Let’s concede that the world is everything that is the case. I understand “everything” here to include not only things but relations among things, including the relationship known as perception. In any case, the one thing we know about everything that is the case is that no one knows what that is. We know some of the things that are the case, and can speculate with some confidence about several others; that’s all.

A photograph is an interpretation of the world. Regina DeLuise could rightly describe what is seen in her pictures as her world because, through the very act of selecting from the world, she’s added something, expanding our understanding of what might be the case—given something that was not there before, something that was not yet the case until the making of the photograph. First of all, she selects tone as a language for rendering light; in agreement with a longstanding photographic tradition but in contradiction to most current practice in the field, she understands that something of the mute and irreducible existence of things can be expressed more forcefully in shades of gray than through prismatic color. Strange: the color of things is not recorded in these photographs, but it is not missing from them.

Few photographs embody a world made of nothing but shades of gray as fully as DeLuise’s Porch, Yaddo, Saratoga Springs, NY, 2018. The image is so nebulous that at first you might think it is simply out of focus; the more closely you look at it, the less you see. Better to lean back a bit and let the shadows gather into forms. In doing so, you’ll also become more conscious of the vertical folds that traverse the immediate foreground, which show that we are seeing this space through a kind of scrim—perhaps not literally a gauzy fabric, but perhaps a sheet of plastic? In any case, by eliminating any extreme contrasts of light and dark, this material through which we see reinterprets the black and white world as a plane on which shadows are gathered and dispersed rather than as a stage on which volumetric objects are situated.

Perhaps the most important factor of selection and limitation, for any photographer, is the act of framing—the particular way I take a (typically rectangular) “cut” from the world to show as “my” world. On this matter, DeLuise’s photographs sometimes offer a meta-commentary—they draw deliberate attention to their framing so as to make it part of the work’s subject. A good example would be Table and Chairs, Bogliasco, Italy, 2017, where what centrally occupies the frame is not the furniture mentioned in the title, but rather the framed view out a large window onto a nearby tree trunk and the surrounding landscape, which includes not only more distant trees but also a fence separating the single nearby tree from the rest but also echoes the horizontal and vertical elements of the window itself, the sash and frame. The world “out there” is at once wild and irregular, like the bark of the tree or the spreading branches and leaves of the closest one on the other side of the fence, but it is also divided up, with a geometry that is both imposed on the terrain and inherent in our means for getting a view on it (the window). At the same time, as the wood grain of the table in the foreground reminds us, the very planes of our artfully or artificially constructed world incorporate the wild matter of the world beyond and before geometry. Etymologically, a camera is a room; this picture reminds us that although part of the function of the camera is to separate itself and its operator from the world—to put the world, temporarily, “over there” in order to get a view on it—the apparetus is also part of the world that it is trying to get a view on. Except in a mirror, however, it can never show itself, but here, DeLuise evokes the working of the camera without including its reflection in her frame.

Showing me something of her world, the world that appears only through the camera by means of which she interprets the world—like a Kempff or a Schnabel interpreting through an instrument they handle as only they know how—DeLuise at the same time shows me how she shows me her world. This redoubling, by which she not only offers an interpretation not only of the world but of her interpretive apparatus, is not only in the interest of cognitive penetration. It also makes possible a further extremity of pleasure.