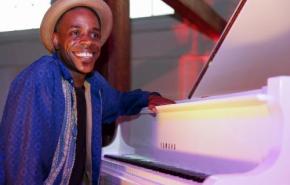 There’s good reason why jazz fans and critics alike are so excited about Lafayette Gilchrist. The Baltimore-based pianist hit the scene hard with his debut, The Music According To Lafayette Gilchrist, and went straight to earning raves for his sophomore release, Towards The Shining Path. Emerging from jazz legend David Murray’s Black Saint Quartet, Gilchrist has an approach and presence that’s drawn comparisons to royalty such as Andrew Hill and Sun Ra. With his own band the New Volcanoes, Gilchrist... more
See 2018 $10,000 Mary Sawyers Baker Prize Winning Portfolio
View Lafayette's Resume

Is there a chance to dance our way out of our constrictions? My challenge with the Deep Dancing Suite is how do we imagine the dance within the context of popular music and yet hold fast to the principle of free improvisational spontaneity. I'm trying to find that musical space where the heart meets the mind and hips and feet in time.

New Urban World Blues is simply how the music feels to me. Central to this project is the Blues for Freddie Gray video. Myself and members of New Volcanoes worked with Joshua Emmitt of Shutter Frequency to create the video.  This offering is my effort to never remain silent in the face of our global crisis.

Best of Baltimore 2017 Baltimore Magazine (August 2017)
Lafayette Gilchrist--LOCAL LEGEND
“Jazz lovers are guaranteed to have run into this world-renowned icon playing the keys in his trademark chapeau. His feats as a composer are especially poignant and timely, like his piece “Blues for Freddie Gray,” which has brought ecstatic crowds to their feet.”

Baltimore City Paper (Sept 19, 2017)
Best Band: Lafayette Gilchrist and the New Volcanoes
“Lafayette Gilchrist and the New Volcanoes are one of those bands that get more love in Europe than they do at home. But they have been banging out their big band concoction of funk, go-go, jazz, blues, and soul for over a decade now. And they keep getting better and better—and there is nothing throw-back about this music. It is now. This year’s “Blues for Freddie Gray,” with vocals by Brooks Long, is one of the band’s best recordings and shows Gilchrist at the top of his writing game. It’s music that swings and thumps and bounces—with a heady dose of wailing avant-garde horns and a subterranean sorrow that sweeps along underneath it all. The New Volcanoes rock an existential groove that shouts out the pain and the glory of being alive. Now the band is set to reach new audiences as Gilchrist’s song ‘Assume the Position’ serves as the closing credit music on “The Deuce,” the new ‘70s New York porno drama made by David Simon and George Pelecanos. But before we die, we salute y’all as the last Best Band in this last best city, a hard town by the sea (sort of).”

Best Music of 2017 Baltimore Magazine (Dec 13, 2017)
“As for many of us, 2017 was a year of introspection and growth for the Baltimore music community. Familiar faces returned home, launched new ventures, or released seminal albums. New artists popped out of the woodwork and made their mark on the local scene. Collaboration was prolific, emotions were liberated, and a sort of homegrown catharsis ensued. A sense of change is in the air, and with the amount of talent we saw this year across all genres, we can’t wait to see what the future has in store for 2018. We couldn’t fit them all, but here are a handful of our favorite musical moments from the tumultuous past 12 months…” “Local jazz legend Lafayette Gilchrist released a new album this spring with a powerful single titled “Blues for Freddie Gray.” Riddled with Gilchrist’s pounding piano keys, a full brass section, and the soulful vocals of old-school virtuoso Brooks Long, the song is post-2015 Baltimore in a bottle. The lively, driving number is full of energy and emotion, with audio samples from actual television footage following the death of Freddie Gray and subsequent officer trials. But despite the opening police sirens and closing whirr of a Foxtrot helicopter that both speak to the lack of closure in Gray’s case, Gilchrist ends on a hopeful note. “I want to know that there’s a day that’s coming soon and fast,” howls the ever-talented Long. “I want a justice and a peace that’s made to last and last. Don’t ya tell me that we can’t all get it done.”
By Lydia Woolever

Baltimore Sun (Dec 19, 2017)
"Baltimore music made its excellence known in 2017 through captivating music videos, fully conceptualized albums, free mixtapes, earworm singles and the myriad other ways the Internet has made music consumption feel like a never-ending pursuit. And when the songs are this good — embedding their nuances and most-obvious thrills into our heads long after they end — that’s a journey we’ll happily embrace, year after year. Once again, we chose 30 tracks from Baltimore artists that stood out most this year, presented below in no particular order... "Lafayette Gilchrist, “Blues for Freddie Gray” (Manta Ray Records): Mixing go-go rhythms with the jazz piano playing of Baltimore’s Lafayette Gilchrist, this lively, horns-filled track finds guest vocalist Brooks Long, another Baltimorean, singing, “I want a justice and a peace that’s made to last and last.”
By Wesley Case, Contact Reporter

The GoGo Suite is a celebration of the music and city of my youth. Growing up and living in and around Washington DC this music was omnipresent and has shaped so much of my rhythmic orientation as well as my overall musical imagination. It has given me my initial exposer to jazz as a music re-integrated into a popular homegrown dance music form. And so given the horn heavy nature of my own band New Volcanoes, and although residing in Baltimore, my having roots in DC and at the behest of my long time big brother Vernon Reid Of Iconic Rock Band "Living Color" and with the passing of the late great founder of the GoGo sound Chuck Brown, I felt I had to write The GoGo Suite.